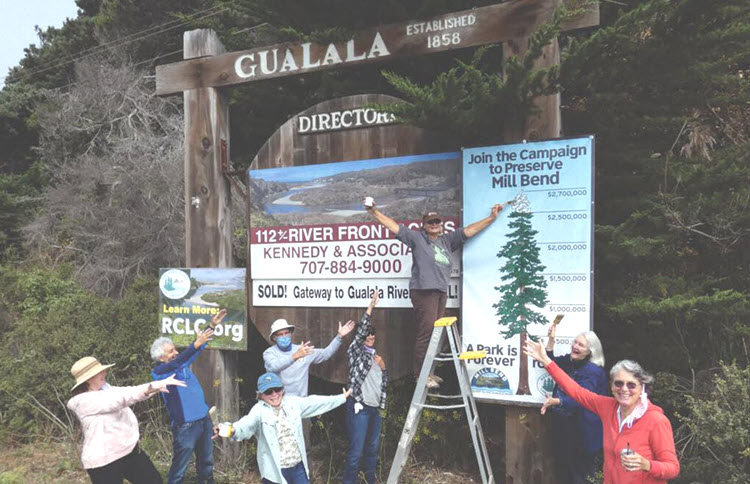 With an outstanding response from the local community, Redwood Coast Land Conservancy announced this week that it has raised the $2.7 million needed to preserve the magnificent Mill Bend site at the mouth of the Gualala River as a permanent, community-owned park.

RCLC launched the final $600,000 phase of its Campaign to Preserve Mill Bend early this summer after securing $2.1 million in government grants. Kathleen Chasey, who said she has been involved in this project “from the very first day,” said the $2.1 million was to acquire the property, but the $600,000 is a stewardship fund.

“We can’t, as a land trust, take on a property unless we have a stewardship fund,” Chasey explained. RCLC is a small, volunteer-run nonprofit, and at first the idea of raising hundreds of thousands more was daunting, she said. So RCLC began quietly contacting potential donors and raised half of the needed stewardship funds before publicly launching this final fundraising phase.

When the organization did mount its campaign this year, “We went out there and asked the community,” Chasey said, “and they responded. It got people’s attention.”

“The community response has been amazing”, said Tina Batt, president of the local land trust. “More than 500 people have stepped up to make sure this beautiful piece of land is preserved as a park forever.”

Now that the funds to preserve Mill Bend have been raised, RCLC hopes to close escrow on the property before the end of the year and to start planning for the long-term preservation and restoration of the Mill Bend site.

The acquisition and stewardship of this property is a major undertaking for RCLC, which until now has been an all-volunteer organization. As RCLC began its work on the restoration of Mill Bend and the creation of trails and public access improvements, Batt said, “We have recognized that we will need to hire professional staff to oversee and coordinate the next phase of planning for the Mill Bend project.” RCLC is currently seeking a part- time Mill Bend project manager and has posted the position on its website.

“Now our next steps are the fun part,” Chasey said. “We’ve launched the next phase: the planning process,” she said.

RCLC recently presented an online community forum entitled “Mill Bend, Yesterday, Today, and Tomorrow” to bring community residents up to date on next steps for Mill Bend and to gather input on community preferences. People who missed the forum can see a recording of the presentation on the RCLC website at rclc. org. People can also still leave feedback for the organization through a survey on the website as well.

Chasey said the group hopes to provide some initial results in January or February 2021.

Founded in 1992, Redwood Coast Land Conservancy is a local land trust based in Gualala and supported primarily by local volunteers and by donors near and far. In partnership with the California State Coastal Conservancy and other agencies, RCLC has set aside and protected multiple scenic public access areas along the southern Mendocino Coast, including the Gualala Bluff Trail, Cooks Beach and Hearn Gulch Preserve. RCLC also holds local conservation easements for habitat protection and enhancement.

Contributions for the Mill Bend project can be made to the Redwood Coast Land Conservancy via its website or by sending a check to P.O. Box 1511, Gualala, CA 95445.

← Prev: Article about Mill Bend Campaign in the ICO...just $15K needed Next: Gate to protect river from motor vehicle damage →