Where is Trespass Beach? 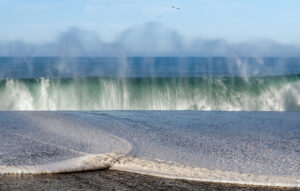 Getting to the beach was harder before Redwood Coast Land Conservancy (RCLC) started in 1992.  There were fewer places for public access along the southern Mendocino coast between Schooner Gulch and the border with Sonoma County.

Current board member Trish Miller shared her recollections of one private local beach in the 1980s that her family nicknamed “Trespass Beach”.

“There was a barb wire fence and lots of poison oak.  In one spot the barb wire was opened up.”  She adds that there was a steep “social trail” after that that had ropes tied to trees.  “It was a bit of a jump down to the beach.”

Where was it? Read on for more clues.

Trish and her family were uniquely positioned for regular beach adventures, since they homeschooled their 3 children and she let them explore their own interests. She says, “When there was a low tide, we got to go. In the spring when you had really low tides, you could go around to the north and the south and get to the next beach and that was exciting.”

Trish describes some of their adventures when they had “whole school days” on this beach. Her middle son became quite adept at using kelp to make music.   “He could get incredible tones from making kelp horns.  It was loud—sounded like a Norse God.”

Both her sons were skilled at building sand fortifications to hold back the tide.  They became keen observers of nature.  “If there was something dead to look at, that was even better.”

Her daughter was an avid reader, and used the pile of sun-bleached logs as a snug retreat to read Jane Austen’s books.  It was also a place for sharing private “young woman’s thoughts” with her mother.

Trish recalls, “There was a huge log they had to cut when it became public access. We have 2 slabs we bought, and one will be in the house she [daughter Melinda] is building.”

“We knew that beach throughout the year in a way that was intimate and very sweet.  I think there is such beauty in being still and being out in nature. It calls to you–it heals you.”

She worries that kids these days have more “nature deficit disorder” from not playing outside.  “If my kids didn’t have access to the outdoors, they would not be the same people they are.” Her children earned National Merit Scholarships and her middle son is getting a PhD in physics at Stanford.  Trish credits this beach and the time they spent as a family outdoors for some of that achievement.

When RCLC acquired a public easement for Cooks Beach in 2002, Trish and her family continued to help with clean-up and monitoring.

Taking care of the local places we love is part of RCLC’s mission, because we want more families to have life-affirming experiences in nature.

Joel Chaban has served as RCLC’s Project Manager for Cooks Beach since 2017.