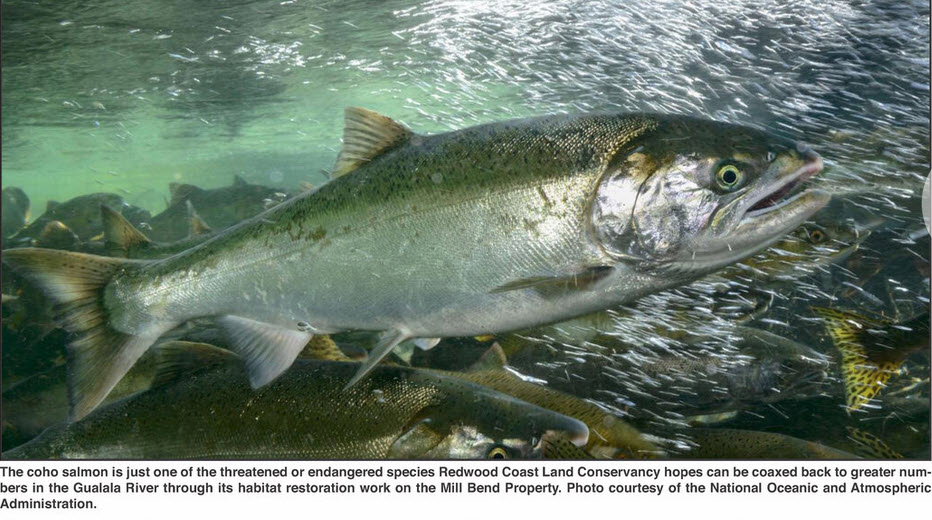 The Redwood Coast Land    Conservancy (RCLC) announced this week an award of $845,000 toward the purchase of the 113- acre Mill Bend property at the mouth of the Gualala River. “We plan to raise enough funds through grants and community contributions to preserve and protect this vital property in perpetuity,” said RCLC President Christina Batt. “This grant marks an important step toward completing the purchase of Mill Bend.” The full purchase price of the Mill Bend property was $1.8 million.

Two state agencies made the grant, the California Natural Resources Agency and the California Transportation Commission. $800,000 will go toward reimbursing the Allemall Foundation, the interim conservation holder of the land, and $45,000 is for further appraisal and administrative oversight of the Mill Bend Project.

“I want to thank Mendocino Land Trust and their executive director Ann Cole and the conservation project manager, Nikki Houtz in particular for their work in preparing this successful grant application as part of a combined effort to find funding for this project,” said Batt.

Sonoma Supervisor Lynda Hopkins commented, “It’s so wonderful to have something that inspires hope right now. It’s great to see that we can keep going forward to create a resource for the community for the future.”

But $845,000 is just the beginning. The RCLC calculates it needs a total of $2.7 million to complete the park, of which $1.8 million is to reimburse the Allemall Foundation, $300,000 for a comprehensive planning process, and $600,000 for long-term stewardship of the property.

“The $845,000 award announced today is part of the overall RCLC Campaign to Preserve the Mill Bend,” said project director Kathleen Chasey, “Our goal is to restore the river and improve the land so it will be preserved as a community park forever.”

The funding drive is structured to complete the purchase of Mill Bend, and to raise funds for the responsible stewardship of the property, including a comprehensive planning process for the future of Mill Bend. In addition to the $845,000 grant received this week, the RCLC has also raised $300,000 from private individuals, as lead gifts already pledged for its Stewardship Fund, for a total $1,145 million to date.

In the coming months, the conservancy organization hopes to match these funds with an additional $300,000 from the community. Chasey said the campaign will run from June to September, or until the funding goal is met.

Assemblymember Jim Wood, who has actively supported the Mill Bend conservation project commented, “Almost three years ago, when the Mill Bend parcels became available, so many people had a dream to forever preserve the beauty of this scenic gateway to the Gualala River watershed, and this grant will go a long way to making it a reality. With this generous grant of $845,000, other contributions already raised and the generosity of locals who have donated $300,000, they have more than half of what’s needed to reach their impressive goal creating the Gualala River Park. Congratulations to all for their dedication and hard work!”

Mendocino Supervisor Ted Williams, who early on supported the Mill Bend project said, “I remain impressed by the perseverance of local conservation champions. This award represents their rapid pace in ensuring estuary and wetland protection. The effort goes beyond stewardship of critical habitat, effectively boosting quality of life for residents through nature access while offering conservation education to visitors.”

“This grant, along with funds from gracious community donations, will go a long way in furthering the Mill Bend Conservation Project,” said Rep. Jared Huffman, who is a member of the House Natural Resources Committee. “It’s great to see support for such an important project in my district to protect its treasured natural resources from development. I have been a supporter of this project from the start, and have been glad to advocate on behalf of the Redwood Coast Land Conservancy so they can obtain vital funding for these efforts. Restoring and preserving these lands will not only bring much-needed recreational value to the area, but it will have long-lasting benefits for our invaluable coastal wetlands and uplands habitat.”

Founded in 1992, Redwood Coast Land Conservancy is a local land trust based in Gualala and supported by local contributors and volunteers. In partnership with California State Coastal Conservancy, RCLC has set aside and protected multiple scenic public access areas along the southern Mendocino Coast, including the Gualala Bluff Trail, Cooks Beach and Hearn Gulch. It also holds local conservation easements for habitat protection and enhancement.

More information about RCLC and about the Mill Bend acquisition can be found on the RCLC website at www. rclc.org. Contributions for Mill Bend can be made to the RCLC via its website or by sending a check to P.O. Box 1511, Gualala, CA 95445.