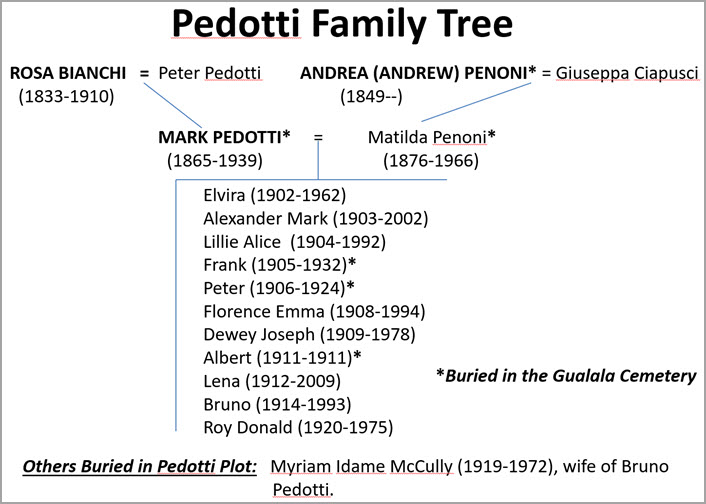 This large cemetery plot is the final resting place for family members and descendants of two half-brothers, Mark Pedotti and Antonio Ciapusci who emigrated from Italy with their mother, Rosa Bianchi Pedotti Ciapusci in the late nineteenth century.  Their families enjoyed a close relationship, both in their native Italian village and on the Mendonoma Coast.  Through their industriousness as both farmers and businessmen they went on to acquire most of the land comprising the greater town of Gualala.

Members of the Pedotti and Penoni families buried here are the following:

Andrea “Andrew” Penoni, Sr.  was born in Samolaco, Sondrio, Italy on 2 February 1849.  His parents were Antonio Penoni and Maria Pedotti. He married Giuseppa Ciapusci (b. 1853 in Samolaco, Italy), the sister of Antone Ciapusci, and had two known children, Matilda Penoni Pedotti (1876 – 1966) and Andrea Penoni, Jr. (1879 – 1955). Antonio emigrated to the United States in 1879 at the beginning of The Great Italian Diaspora. His children joined him in 1897.  When he first arrived in the United States he worked in the mines near Secret Cannon, Eureka, Nevada. Andrea died after 1920.

Matilda Penoni Pedotti was born in Samolaco, Sondrio, Italy on 18 November 1876. Her parents were Andrea “Andrew” Penoni, Sr. and Giuseppa Ciapusci.  She emigrated to the United States with her brother, Andrea “Andrew” Penoni, Jr., arriving in New York on 18 July 1897. Matilda married Marco “Mark” Pedotti in 1898, and moved to the family ranch on Signal Ridge, later living in Gualala.  Matilda had eleven children: Elvira, Alexander Mark, Lillie, Frank, Peter, Florence, Dewey, Albert, Lena Rose, Bruno, and Roy Donald. Their children attended school in Point Arena and Gualala. After her husband’s death in 1939, she lived with her children: Bruno, Donald, and Lena in Point Arena. Matilda died in 1966 at the age of 89 in Sebastopol where she was living with her daughter, Lena. She only spoke Italian and was a true Italian woman, always wearing long house-dresses and a scarf on her head.

Mark Pedotti was born in Samolaco, Sondrio, Italy in April 1865. His parents were Peter Pedotti and Rose Bianchi. He emigrated to the United States as a young boy with his mother Rose and half-brother Antone Ciapusci. In 1892, after he had been living at the family property on Signal Ridge for 5 years, Mark was granted 160 acres under the Homestead Act of 1862. Going into business with his brother, Antone Ciapusci, they purchased the Tait Ranch in 1903, and then the Gualala Hotel in February 1907.  They owned most of the land between Gualala and the present-day site of St. Orres. The brothers stayed in business together until Mark died on 1 May 1939 at the age of 74 years old.

Albert Pedotti, the eighth child of Mark Pedotti and Matilda Penoni, was born 21 August 1911.  Albert died on 4 September 1911, at the age of two weeks.

Frank Pedotti, the fourth child of Mark Pedotti and Matilda Penoni was born in 1905. Frank, along with his brothers Alex and Dewey, sister Elvira, and her husband Romeo Sala (brother of Louise V. Sala Stornetta of Manchester), leased property known as the former Schroyer Ranch from Al and Fred Eckert around 1926. Frank Pedotti never married, and had no children, dedicating his life to farming and ranching.  He died on 13 August 1932 after undergoing treatment for several weeks for an infection he incurred after getting his tooth pulled by the barber in Gualala.

The Pedotti Ranch was located just south of Fort Ross and was operated first as a Jersey Dairy, and then later for raising livestock, by the Pedotti family for about seventy years. Their lease of the Schroyer Ranch continued, and by 1933 was run solely by Frank’s brother, Alex. Three generations of the family lived on the ranch where they raised sheep, cattle, and operated a campground.  The campground was a favorite destination for abalone divers wanting proximity to prime rock-picking spots and provided additional income for the family, as they, along with many north coast ranchers, looked for ways to offset the narrowing profit margins due to livestock predation.

In 1980, the State of California purchased the property from the Schroyer family and allowed the Alex Pedotti, and his son Dave, to continue to lease the ranch. Changes began in 1985, when the state terminated the lease and assumed control of the campground area, renovating, and installing new infrastructure. In 1989, with strict grazing regulations and a goal of eliminating livestock grazing on state lands, leases were affected up and down the coast, the Pedotti family found themselves faced with either reducing their herd or throwing in the towel on producing lambs and wool.

Dave eventually bought his father Alex out of the business, and continued operations until 1995. Alex, Dave and his sons Lucas, and Tyral moved north to Oregon, where Alex died in 2002 at the age of 98. Dave’s sons have continued the family’s legacy in the agriculture industry.

Peter Pedotti, the fifth child of Mark Pedotti and Matilda Penoni, was born 7 November 1906. Peter, named for his grandfather (Peter Pedotti) grew up on the coast and was a student at Point Arena High School. He fell critically ill with bronchial pneumonia and was hospitalized on the 18th of February 1924. He died four days later from a severe attack of influenza, despite the heroic efforts of the hospital staff to save his life. Note: his obituary stated that Peter was sixteen years of age, however documentary research shows that he was seventeen years old at the time of his death.

Myriam Idame McCully was born in Quincy, Adams County, Illinois. Her parents were Kirk McCully and Elsie Daniels. Myriam’s father died when she was one year old, and she was raised by her grandparents Grant H Daniels and Martha J Hubble in Valley, Kiowa County, Kansas. The entire Daniels family moved to Sonoma County in the early 1930’s.  Myriam married Theodore Snider in Petaluma in November 1935, and had three children Betty Jean Snider Woodward, Theodore Snider, and Shirley Snider. After her husband died in 1940, Myriam married Bruno Pedotti, a recently discharged army veteran who was in the second wave of soldiers to storm Normandy Beach on D-Day in June 1944.  Bruno fought in France, Italy, and Germany. They lived in Petaluma, operating a dairy ranch with Bruno’s brother, Donald. Myriam died in a car accident in Petaluma on 31 December 1972 and was buried in the Pedotti plot at the Gualala Cemetery.  Bruno died in 1993 and is buried at Santa Rosa Memorial Park.

*Thank you to Dave Pedotti, son of Alex Pedotti; and Betty Woodward, daughter of Myriam McCully Pedotti for contributing to the Pedotti Family Narrative. 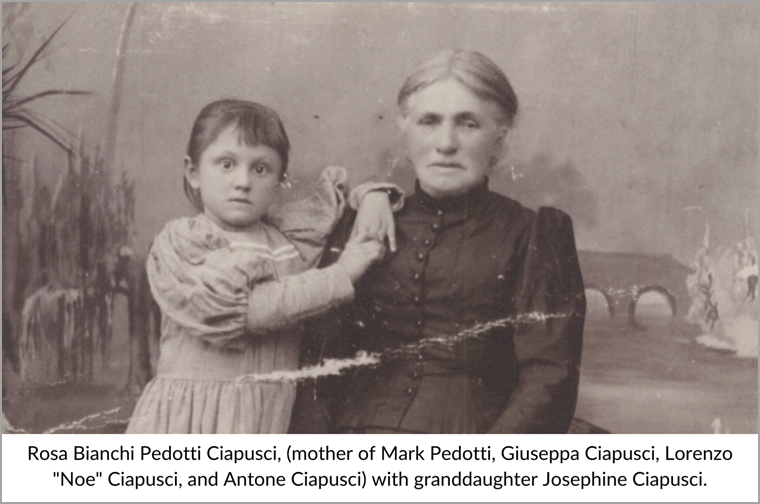 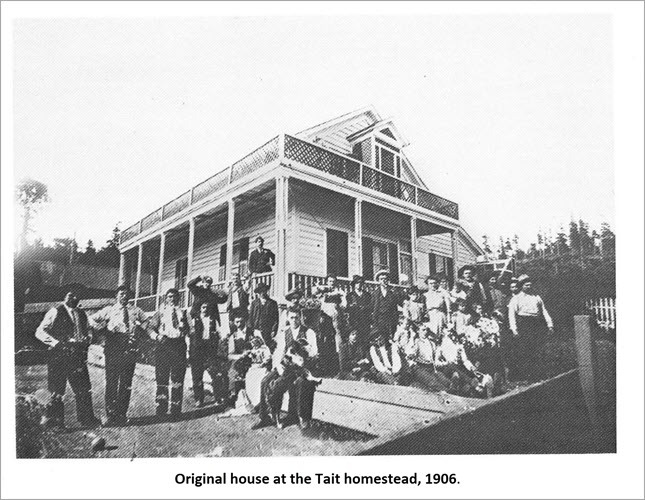 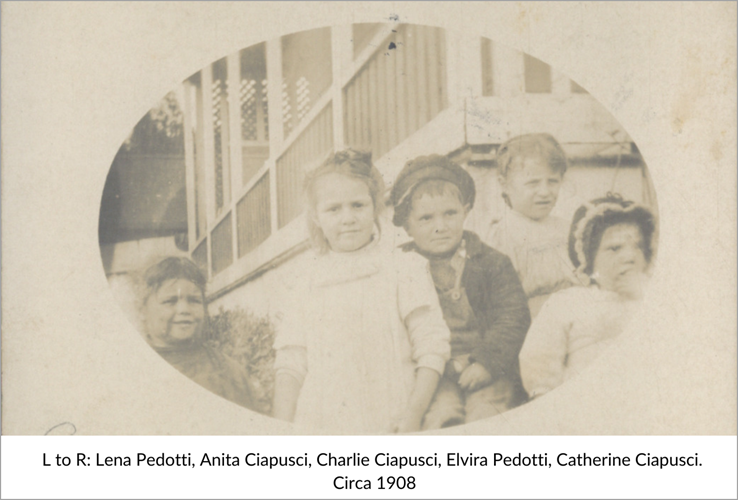