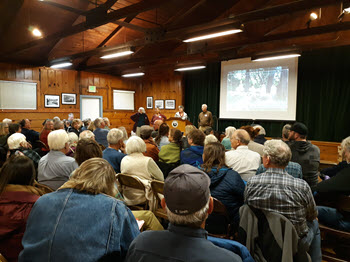 “The Gualala Community Center was overflowing with interested local residents when the Redwood Coast Land Conservancy held a public meeting Tuesday on next steps in the funding and development of the Mill Bend parcel. The Conservancy acquired the 112-acre Mill Bend property in October with the assistance of the Allemali foundation in Libertyville, Maryland. John Walton, an advisor to the RCLC, said the property, which has been the site of several lumber mills, had not changed hands in 60 years.”
RCLC president Laurie Mueller told the enthusiastic crowd that the Mill Bend project was “the gateway” to the RCLC vision of a Gualala River Park that would one day extend seven miles from the Highway 1 bridge in Gualala along the west side of The Sea Ranch to the twin bridges at Valley Crossing. 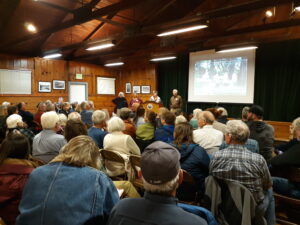 A capacity crowd attending the RCLC briefing on next steps with the Mill Bend conservation project. Photo by Robin Applegarth

The conservancy created the Gualala River Park, LLC, for the purpose of holding the Mill Bend property until it raises $1.8 million to repay the Allemall Foundation and $600,000 to support stewardship of the property in perpetuity, including restoration of the land and improvements like parking, picnic areas, trails, public restrooms and the creation of an environmental research and education facility.

Mill Bend Project Director Kathleen Chasey said the organization hopes to be able to repay $1,8 million to the Allemall Foundation within two years and possibly earlier. Initial contacts with various state and federal entities that fund conservation projects, Chasey said, have been very encouraging. “When you have a salmonic stream, and are given money [to conserve it], it puts a smile on everyone’s face.”

She said trails to be constructed on the Mill Bend site may eventually connect with the Gualala Bluff Trail and trails through the Gualala Arts Center property, but careful evaluation and planning is first necessary because much of the property is fragile wetland. The Conservancy will also have to engage in a permitting process with Sonoma County and the Coastal Commission.

While the RCLC is the lead actor in the acquisition and development of the Mill Bend property, Chasey said, they have been in close consultation with many other organizations including the Mendocino Land Trust, the Sonoma Land Trust, Sonoma Regional Parks, California Fish and Wildlife, the U.S. Fish and Wildlife Service, the California Coastal Commission and the California Natural Resource Agency, among others. The Mendocino Land Trust played an important role early in the acquisition process, Chasey said.

Chasey outlined many conservation goals for the audience. The main goal, she said, is the permanent protection of 112 acres of estuary and the lower Gualala River as well as protection of threatened and endangered species that populate the property. The project, she said, would also restore and enhance the site’s wetland habitat and nearby uplands, remove invasive species and contaminants at the site, and protect an 18th century historic etary on the property. Chasey also said the organization also hopes to improve boat launch access at Mill Bend.

Tina Batt, RCLC fundraising director, said several state and federal agencies have invited the Conservancy to apply for grant funding, a process that is already well underway. RCLC will submit several grant applications by the end of the year, and expects to hear back from the funding agencies by the spring of 2020.

All speakers emphasized that the RCLC is a volunteer organization. Volunteers and others wishing to make tribution to the Conservancy’s effort can find additional information at the RCLC website, www.rclc.org.