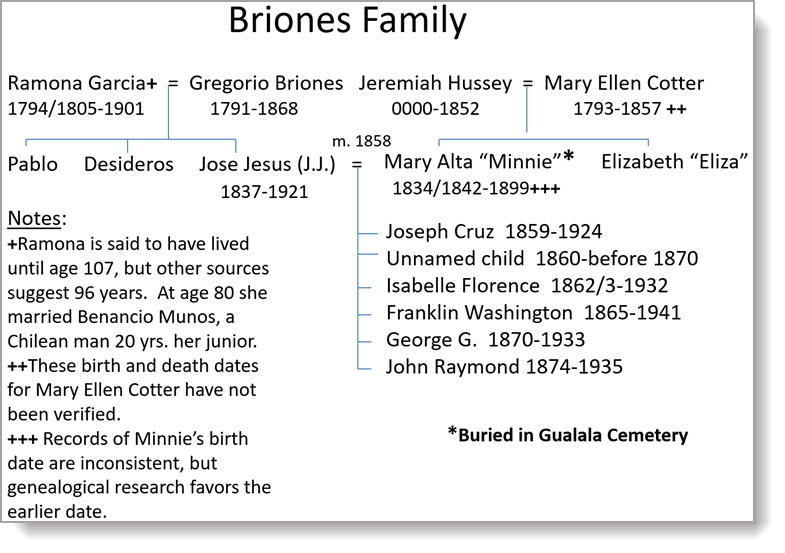 Mary Atta “Minnie” Hussey was born 13 April 1839 in Fermoy, Cork, Ireland. During her lifetime, her life was shaped by more history than most people could ever imagine living through. She was not directly involved in the choices that both her own family, and the family that she married into made, however, they likely impacted her life, and gives perspective on what she personally lived through.

Minnie’s mother, Mary Ellen Cotter, was among the 40,000 Irish convicts (25% of whom were women) that were shipped by the Irish government to Australia between 1791 and 1867. The Hussey family arrived in Sydney on 19 August 1839, and shortly thereafter, Mary Ellen served a twenty-four-hour sentence for a very minor crime and was set free. The family made a life on Cumberland Street, a historic neighborhood in Sydney that was home to both free individuals and convicts from Ireland.

Minnie’s father, Jeremiah Hussey, a boot and shoemaker by trade, died in Australia in 1852. It was probably shortly after his death when Minnie, and Elizabeth Agnes “Eliza” Hussey, emigrated to California. At the time of their arrival in San Francisco, around 1853, there was rampant racial and religious discrimination and violence against Irish immigrants and Catholics. Eliza and Minnie strategically used England and Australia as birthplaces, possibly to avoid discrimination and assimilate into society. Other family members may have emigrated with them.

Eliza Hussey married John Gannon, the Sheriff of Marin County, (1828-1899) in Bolinas in 1854. Minnie married Jose de Jesus “J.J.” Briones (1837-1921) on 11 August 1858 in Bolinas. J.J. Briones, or Joseph as many called him, was the son of Maria Ramona Garcia y Romero (1805-1901) and Gregorio Briones (1791-1863). J.J. was born in Monterey, California, his family originally from Sinaloa, Mexico; and moved with his parents and siblings to Rancho Las Baulenes, which was granted to his father, Gregorio, by the Mexican government for his service throughout the California Indian Wars.

Minnie and J.J. lived on Rancho Las Baulenes. Rafael Garcia, the uncle of J.J. Briones, was granted the neighboring Rancho Tomales y Baulenes, and the 40,000-acre Grante Del Norte, also known as the Garcia Land Grant, which encompassed the very land that Mill Bend and the Gualala Cemetery sits upon, and where J.J. and Minnie would later make their home.

Rancho Las Baulenes, originally known as Bauli-N, was home to the Coast Miwok for over 3,000 years. By the time the Briones arrived in the 1830’s, those that were native to the land had been removed to the missions or scattered throughout Marin and Sonoma. There were very few Coastal Miwok living natively on the land. When Minnie married into the Briones family, almost two decades of intense California history had been written, the Treaty of Guadalupe had been signed, the Mexican American war was ending, San Francisco was booming, and the transition out of the land grant era, had begun. California statehood was looming.

The Briones began to lease and sell off the Bolinas property in anticipation of their grant being recognized by the State of California. J.J., his father, and brothers didn’t understand the value of the land, nor the language that the squatters, loggers, and businessmen who had begun staking claims, spoke. It wasn’t until 1860 that the grant for Rancho Los Baulenes (1864 for the Rancho Tomales y Baulenes) were upheld in court. However, the attorneys that represented the Briones families, and other neighboring grantees) took their payment in land, leaving the Briones family in a predicament with those that they had leased and pre-sold property to. After the dust settled, the rancho that Minnie and J.J. Briones called home had dwindled down to 2,422 acres. Assets were sold off, including a herd of over 100 horses. Gregorio died shortly after, leaving each of his children equal shares of the property.

It was during this final era of these ranchos, that Minnie and J.J.’s six children: Joseph Cruz, Isabelle Florence, Franklin Washington, George G., John Raymond, and another child that presumably died young, along with their many cousins, were born and raised. Growing up on the rancho with their Briones and Garcia cousins. The Briones family was known to live very modestly, and only spoke Spanish in their households, starkly contrasted by the Garcia family who lived very lavishly.

J.J.’s and his brother Pablo’s remaining share of Rancho Las Baulenes, operated as a dairy farm, encompassed a large section of land that now encompasses downtown, Little Mesa, and Big Mesa in Bolinas. By 1877, Minnie and J.J. had migrated north to Point Arena, taking their children to join the Briones and Garcia relatives that had settled in the area decades before, when the Grante Del Norte was being developed by the family. In 1882, the dairy farm in Bolinas was sold and subdivided. Their farmhouse still exists today, on Terrace Avenue, and a small dairy barn by the house has been converted into a living space.

Turning back the pages of history to 1844, the Briones and Garcia families had worked together to build out the Grante Del Norte rancho. They built a “vacation” home near the intersection of Mountain View Road and Highway One, just south of Manchester. The Garcia House was erected (still standing in 1904) and used as a boundary shack on the Northern side of the Gualala River in near proximity to Mill Bend. Minnie’s husband, his brothers, and cousins brought in workers and raised livestock in the fields adjacent to the Garcia River. The Briones and Garcia families together spent much of their time in the area.

The Grante Del Norte was originally home to the Kashia, Yokiya, and Bokeya tribes, who like the Coast Miwok had been removed from the land years before the establishment of the grant. The Kashia had found both conflict and protection under the Russians at Fort Ross. However, just two years before the Briones and Garcia families arrived, the Russians had left, leaving the tribe vulnerable. Within a year of establishing themselves on the coast, in 1845, Rafael Garcia, Pablo and Desideros Briones (J.J.’s older brothers), along with their men came to Fort Ross, William Benitz’s home on the Muniz Rancho.

The genocidal actions that took place during the attack were gruesome. Two women were raped, and 150 members of the Kashia tribe were kidnapped and enslaved by the Briones family for many months at the Rancho Las Baulenes. This was the Briones’ and Garcia’s first and last raid on the North Coast, due to the publicity generated from the complaint made to the Mexican Government and the criminal court case that ensued following the attack. No convictions came from the trial, and the Kashia were freed. The conflict was never resolved between the Kashia tribe and the involved parties, and the generational trauma is still carried forward today.

The brutal 1845 Garcia-Briones raid on Fort Ross and the subsequent enslavement of Kashia captives occurred eight years before Minnie Hussey arrived in California from Australia, and thirteen years prior to her marriage to J. J. Briones. The extent to which a young J. J. Briones was involved in the actions of his two older brothers and uncle Rafael Garcia is unknown. However, whether Minnie or her husband bear responsibility for the actions of other family members does not change the lasting impact that these events had on the Kashia people.

The Grante Del Norte had a different fate than the Bolinas grants, its ownership was not upheld in court like the Bolinas grants, as the documentation for it was never filed with the Mexican government. By the time, Minnie and J.J. moved to the coast full time, the rancho was no longer under the ownership of the Briones family. The area was populated by farmers, ranchers, loggers, and businessmen. The family first lived in Point Arena, neighbors to their cousins, the Noriel family (see the Ciapusci family narrative), then later moved to a ranch on the North Fork of the Gualala River. They also lived at Bourne’s landing for some time.

Local lore tells us that shortly before Minnie died, Joseph Briones roped, marked, and castrated a steer. While branding the steer, it broke away and took off, elusively roaming the Gualala watershed for over a decade. The “Wild Briones Steer,” was seen from time to time by hunters and cowboys, however nobody ever came close to roping or shooting it. In the Fall of 1908, a group of local men, including Matt Piper, Frank Piper, Jack Inman, James Lowrey (see Lowrey narrative), George Lowrey, and Doc Hitchcock (see Hitchcock narrative), ceremoniously gathered to hunt the steer. They jumped it at Pete Kineal Flat and bayed it above Switchville. Doc Hitchcock eventually shot the steer.

Minnie died from heart failure on 15 February 1899, and she is buried alone in the Gualala Cemetery. Joseph lived out his life on the coast, passing away San Francisco in 1921. He is buried in Colma. Minnie’s sister, Elizabeth Agnes Hussey Gannon, died in 1892 and is buried at the Mount Tamalpais Cemetery.

CHILDREN OF J.J. AND MINNIE BRIONES:
Joseph Cruz “J.C.” Briones was born in 1859 on the Rancho Las Baulenes, he worked on the North Coast in the timber industry and was a superintendent at Bourns Landing. At the age of 41, he married Frances Spratt, a schoolteacher from San Francisco that was a boarder in his sister Isabelle Briones’ household. In 1915, the couple moved to Sebastopol, and J.C. died 26 January 1924 at his home there. He is buried at the Sebastopol Memorial Lawn Cemetery. They had no children.

Isabelle Florence Briones was born 13 November 1862 or 1863 on the Rancho Las Baulenas, she married John P. Doyle, a native of Ireland, in Mendocino County in February 1889. By 1900, they moved to San Francisco, where her husband worked as a Cigar Dealer. Isabelle had two children, Helen, and Gilbert. She died on 26 June 1932 and is buried at the Cypress Lawn Memorial Park in Colma.

Franklin Washington Briones was born on 18 September 1865 on the Rancho Las Baulenas, he married Lillian J Curtis, who was born in Bodega Bay and had moved to the coast as a young girl. They lived at Bourne’s landing. Frank worked at the Gualala Mill and lived on the coast until 1910. The family later moved to Gilroy, and then San Francisco. Frank died on 10 Jun 1941 in San Francisco and was buried at Cypress Lawn Cemetery in Colma. There is also a memorial marker for him at the Chapel of The Chimes Columbarium in Oakland, where his wife, Lillie, was interred. Frank had four children: Pearl (served as postmistress in Gualala), George, Cecil, and Lester.

George G Briones was born June 1870 on the Rancho Las Baulenas, he worked in the timber industry, both in Humboldt and Mendocino County, before retiring in San Francisco. His many injuries working in the woods were well documented. George died on 21 January 1933 in San Francisco. He was hit by a streetcar during a rainstorm. He is buried at the Holy Cross Catholic Cemetery in Colma, California. George never married and had no children.

John Raymond Briones was born 9 April 1874 on the Rancho Las Baulenas. He worked various jobs throughout his life working in Tuolomne County and Solano County. He died on 25 July 1935 in San Francisco. John married Martha Catherine Stayton from Fort Bragg. He died on 25 July 1935; his burial location is unknown. John and Martha had one daughter, Frances Catherine.

An unknown male child appears on the 1860 Census as being one month of age. The child likely died young, prior to 1870.

NOTE: Numerous conflicts appear in records for the birth of Minnie Briones, and her children. Records were examined very carefully, with the burden of proof on documents created as close to the birth as possible. Dates may not match with other documents readily available, that were created later in their lives. 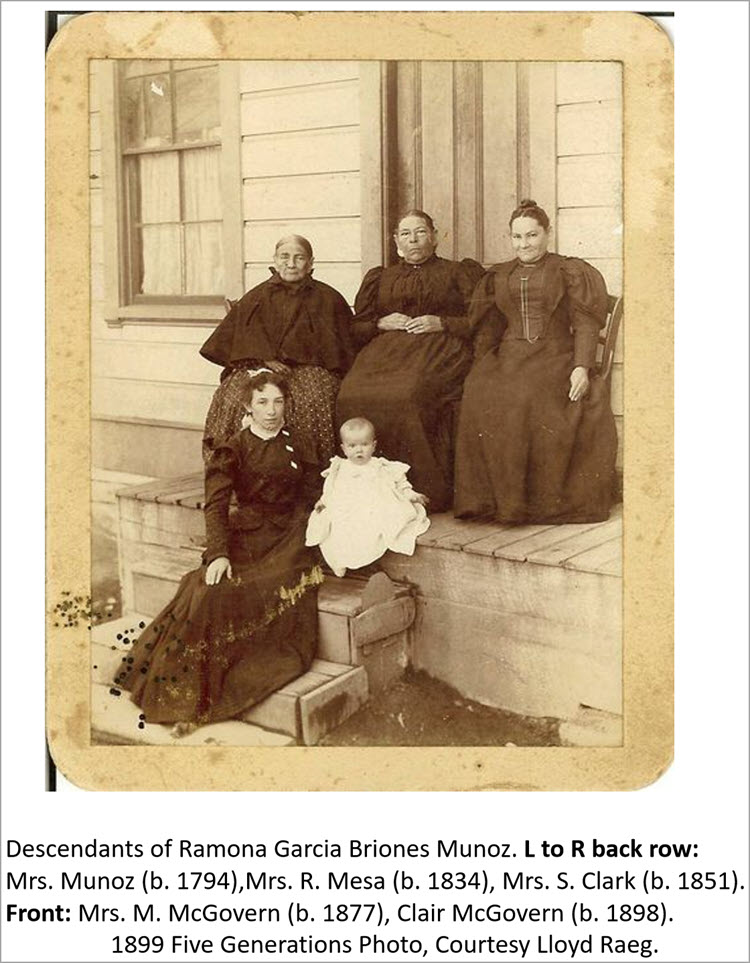