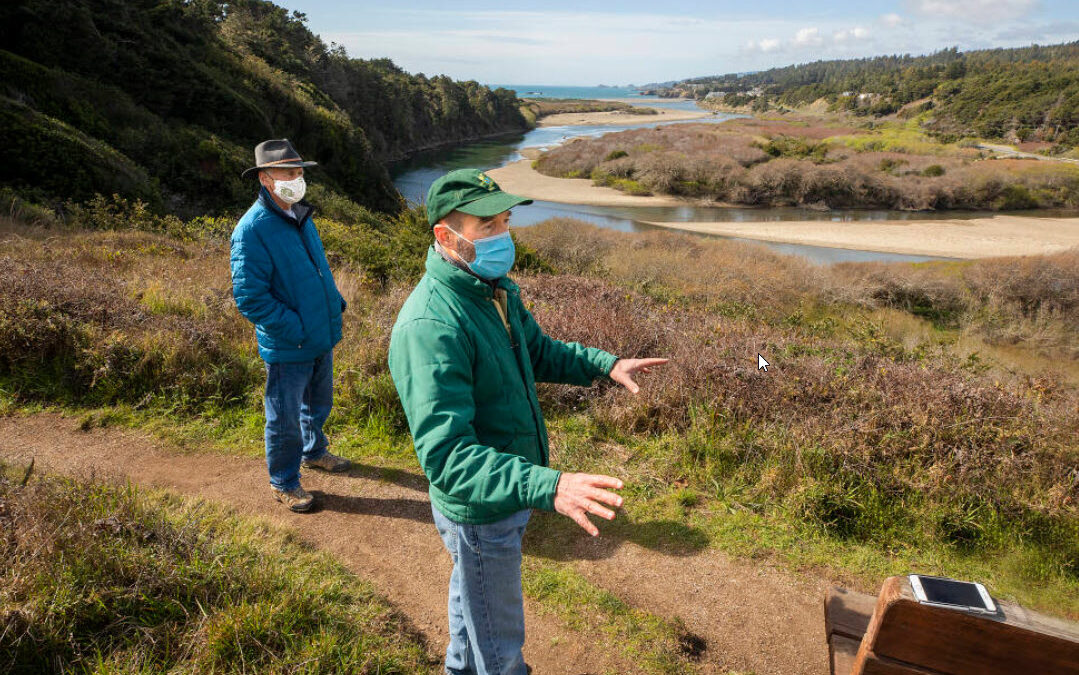 The Redwood Coast Land Conservancy (RCLC) announced the close of escrow on the Mill Bend properties last Friday, January 29, completing the purchase of the 113-acre site at the mouth of the Gualala River.

RCLC, the local land trust based in Gualala, will now take ownership of Mill Bend and determine how best to preserve and restore the scenic and environmentally sensitive river property while providing public access to the community. “Completing this purchase is a huge milestone for us,” said RCLC President Christina Batt, “and is the result of an amazing three-year community effort to acquire Mill Bend to make sure it will be protected forever.”

“RCLC is so grateful for all the hard work that went into completing the Mill Bend acquisition,” she added. “Kathleen (and Lloyd) Chasey let the effort from the very start with the support of Cindy Kennedy and Friends of Gualala River. Their collective leadership made this critical conservation project a reality.”

Batt also thanked the Allemall Foundation, state and federal grant funders, “the many local residents who contributed funds and volunteered their time, and the many organizations who partnered with us to make this purchase happen.”

RCLC purchased the land from the Allemall Foundation, the interim conservation buyer who stepped forward to hold the property when it was put on the market in 2017 by Gualala Redwoods, Inc. so RCLC could line up funds to make the purchase.

As reported in the Jan. 8 issue of the ICO, Dave Shpak has been hired by RCLC as the Mill Bend Project Manager. He will be working with planning consultants, the Mill Bend Technical Advisory Committee and other volunteers to develop a series of plans ranging from the location of trails and parking to the restoration of the river’s salmonid population.

Sometime in the late spring, RCLC plans to present another in the series of public forums the organization has periodically held, Batt said, to provide updates and to gather ongoing community input. The results of a survey taken on the interests and preferences of the local community in September are available on the RCLC website, www.rclc.org.

Although state and federal grants provide funding for major Mill Bend projects, RCLC relies on local contributions to support its ongoing stewardship of Mill Bend, Cooks Beach, the Gualala Bluff Trail, Hearn Gulch Preserve and other projects. RCLC is in the midst of its annual campaign to raise funds to support that work. More than $65,000 has been raised toward the 2021 goal of $85,000, but $20,000 is still needed to support RCLC’s work in the coming year. Contributions can be sent to RCLC at P.O. Box 1511, Gualala, CA. 95445 or made online at www.rclc.org.

Founded in 1992, RCLC is a local, volunteer-run land trust based in Gualala, California. In partnership with the California State Coastal Conservancy and other funders, RCLC has set aside and protected multiple scenic areas along the southern Mendocino Coast for public access and habitat protection. RCLC is a 501(c)(3) nonprofit organization which acquires land or conservation easements in order to preserve, protect, and restore natural areas for recreation, education, and research. Funding comes from public and private grants, donations from the public, and nonprofit and business partners.

Visit www.rclc.org to learn more or to make a donation. Redwood Coast Land Conservancy can be contacted at P.O. Box 1511, Gualala, CA. 95445. 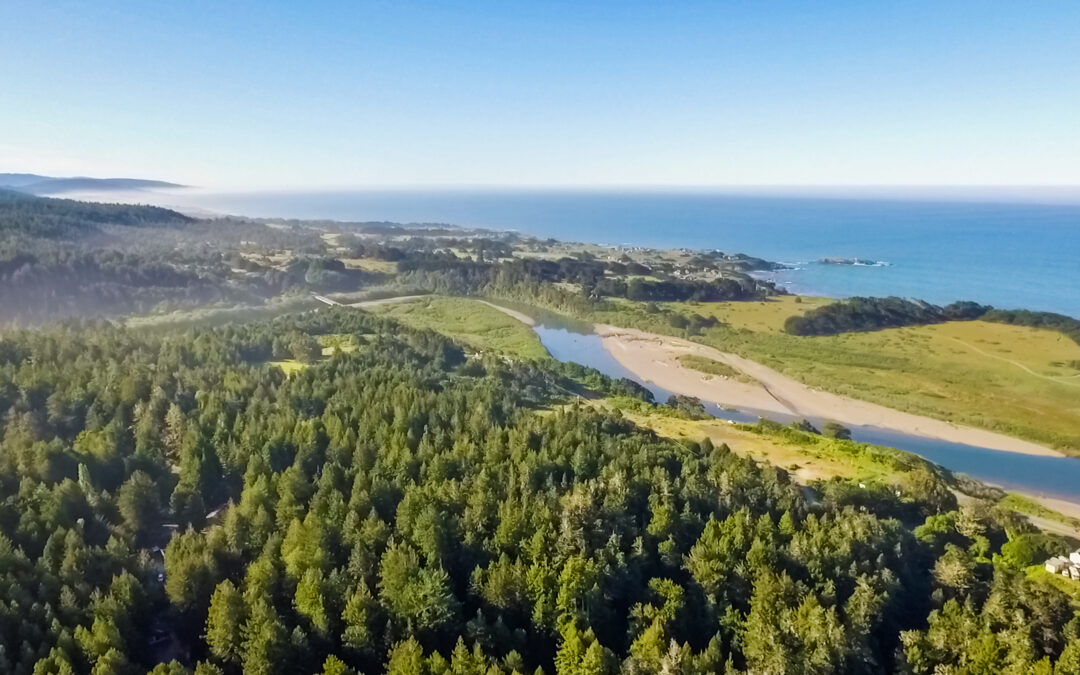 About 70 people crowded into the Gualala Community Center Wednesday evening to consider the future of the last holdings of Gualala Redwoods Inc., including the Mill Bend parcel, the dramatic river view at the south gateway to Mendocino County.

John Walton proposed the community forum after the 112-acre land parcel came on the market earlier this year, for the first time in more than 60 years. Along with a 10-acre commercial property known as China Gulch, the land is the non-timberland remainder of what was 29,000 acres owned by the Edmunds family’s Gualala Redwoods Inc. The timberland was sold in 2015 to Gualala Redwood Timber LLC.

Walton said the forum was intended to give people knowledge about the property and its development constraints, begin development visions for it, and propose a process to achieve that vision. During the evening, volunteers noted the ideas and concerns that were discussed on big sheets of paper with felt pens.

The Mill Bend parcel is almost entirely wetlands, and is therefore undevelopable, according to agent Cindy Kennedy.  The Mill Bend mapped property line extends across the Gualala River, and includes a part of Sonoma county, bordering Gualala Point Park up the hill.

The blufftop portion, called Lower Mill, overlooks the highway and river, and has more possibilities. More than 15 years ago, Gualala Redwoods Inc. floated a concept for a commercial village on the site, Kennedy said, with 171 residential units and 60 visitor-serving hotel units.  That plan was

mothballed because of the economic conditions and the ongoing moratorium on new hookups to the North Gualala Water Company.  It also surrounds the one-acre historic Gualala Cemetery.

Jeanne Jackson, a local environmental advocate and author of the Mendonoma Sightings feature in the ICO, said the Mill Bend is protected wetland under the Coastal Act, and an Environmentally Sensitive Habitat Area for California red-legged frogs, coho and steelhead.

Joel Chaban, a member of the Redwood Coast Land Conservancy board, read a statement from that organization that, while the RCLC is not in a position to take the lead in acquisition, it would be very supportive of a “total community effort” to preserve the wetland.  RCLC offered to contribute up to $5,000 for fact-finding to get such a drive going, Chaban announced.

Chris Poehlmann of Friends of the Gualala River called it a “once in a lifetime opportunity” to keep the community healthy and encourage ecotourism.  “The river is an incredible resource,” he said.

Sus Susalla, Executive Director of Gualala Arts, put in a word of thanks to the Edmunds family for allowing Gualala Arts to use part of the Lower Mill property for overflow parking for Art in the Redwoods and other major events, and he hoped any subsequent use would also allow for that.

Kathleen Chasey offered a suggestion that a trail connect the Gualala Bluff Trail to Gualala Arts through the Mill Bend parcel. She also said that there was a real need for affordable housing in our community, and the Lower Mill parcel should be considered for some private development for that.

Charlie Ivor, who is president of Friends of the Gualala River as well as a member of Gualala Municipal Advisory Council, suggested the community build an art and ecology center, along the lines of the Occidental Art and Ecology Center, as a site for seminars and ecology studies.

Steve Ehret, a planner for Sonoma County Regional Parks, said the Gualala Point Park has no launch site for canoes and kayaks, but Mill Bend has a perfect spot.  He said his agency might be interested in acquiring the portion of the Mill Bend parcel which extends into Sonoma County.

Kathleen Morgan of the Gualala River Watershed Council said Lower Mill site might be considered for a potential reservoir site, which could mitigate the water hookup moratorium while protecting fish in the river.  By the end of the two-hour meeting, lots of ideas had been written on those sheets of butcher paper, and audience members were given paper stickers to affix next to their favorite ideas for future evaluation.

Walton told people to go back to their local organizations to motivate them to collaborate on this project. “It’s going to take a long time, and a lot of meetings,” he said, but he asked people to express their interest in continuing with a community project to acquire the unique parcel by emailing Robert Juengling, who is a member of GMAC, at robert@oceanicland.com